Skip to main content
It looks like you're using Internet Explorer 11 or older. This website works best with modern browsers such as the latest versions of Chrome, Firefox, Safari, and Edge. If you continue with this browser, you may see unexpected results.

Melville Louis Kossuth Dewey was born on December 10, 1851 in a small northern town in New York. He shortened his first name to Melvil as a young adult, dropped his middle names and, for a short time, spelled his last name as Dui.

Dewey invented the Dewey Decimal Classification (DDC) system when he was 21 years old. At the time, he was working as an assistant in the library at Amherst College. Dewey's classification system changed library science and the way libraries cataloged their collections. Melvil Dewey is called the “Father of Modern Librarianship.”

Melvil Dewey died after suffering a stroke on December 26, 1931 at age 80. Seven decades after his death, he is still primarily known for the Dewey Decimal Classification, the most widely used library classification system in the world.

In a nutshell, the Dewey Decimal Classification System (DDC) is a method of arranging non-fiction materials by subject. The system groups all subjects into ten main classes. Each class has ten divisions and each division may be broken down further by adding a decimal point and then more numbers. This allows very specific subjects to be shelved together. For example:

Fiction titles are arranged in alphabetical order by the author's last name.

How to Use the Dewey Decimal System 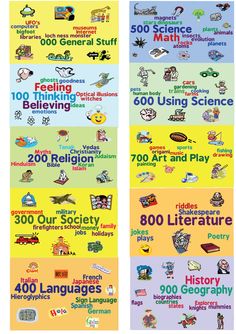